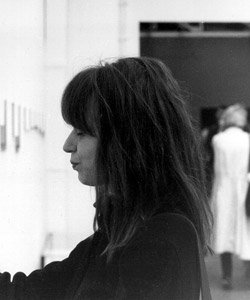 Sabine Hänsgen studied Slavic literatures, history, and art history at the Ruhr University in Bochum. In 1984 she received a grant for doctoral research at the Institute of Cinematography VGIK in Moscow from the DAAD (German Academic Exchange Service). She conducted research and taught at universities in Bochum, Bielefeld, Bremen, Cologne, Basel and served as guest professor at the Humboldt University in Berlin from 2011–2014, and in 2014 also at the University Bremen (Centre for East European Studies). Working as an author, curator, editor and translator since 1984, Hänsgen has been participating in the performances of the Collective Actions group and has also been involved in establishing an audiovisual archive of Moscow conceptualism. Currently she is a research fellow at the University of Zurich on the project “Performance Art in Eastern Europe.”  In 2012 she was a grant recipient of the Igor Zabel Award for Culture and Theory.