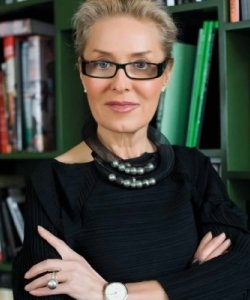 Olga Sviblova is a curator, film director, and arts administrator. She is the Founder and Director of the Multimedia Art Museum in Moscow, and a member of the Russian Academy of Arts. A graduate of Moscow State University with a major in psychology, she later pursued a doctoral degree researching psychology in arts. In the 1980s, she created a number of documentaries, earning her prominence both in the USSR, and internationally. In 1987, she organized her first exhibition, a showcase of emerging Soviet artists.  Over a career spanning three decades, she has curated several exhibitions of contemporary visual art and photography in Russia, and internationally.  In 2007 and in 2009, she was the curator of the national pavilion of Russia at the Venice Biennale.