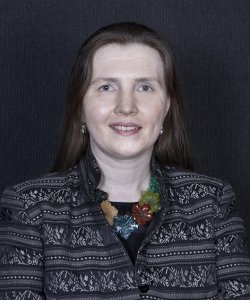 Natalia Kolodzei is the Executive Director of the Kolodzei Art Foundation, and an honorary member of the Russian Academy of Arts. Along with Tatiana Kolodzei, she owns the Kolodzei Collection of Russian and Eastern European Art, which contains over 7,000 pieces by over 300 artists from the 20th and 21st centuries.  Active as a curator and art historian, Kolodzei has curated over eighty shows in the United States, Europe and Russia at such institutions as the State Tretyakov Gallery in Moscow, the State Russian Museum in St. Petersburg, and the Chelsea Art Museum in New York City.  She is an author and editor of multiple publications. Her contributions to books and catalogues include Oleg Vassiliev: Memory Speaks (Themes and Variations) (2004); Shimon Okshteyn: Dialogue with Objects (2007); and Yakov Vinkovetsky: Windows into the Spaces of Light (2001). In 2010 she was a member of Culture Sub-Working Group under the US-Russia Bilateral Presidential Commission. Kolodzei is in demand as a lecturer in the United States, Russia, and Europe.