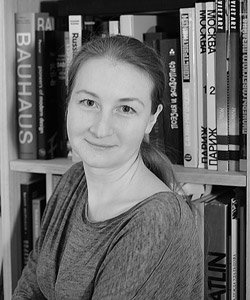 Julia Tulovsky is Curator for Russian and Soviet Nonconformist Art at the Zimmerli Art Museum at Rutgers University, New Brunswick, New Jersey. She is a specialist in Russian art and holds her Ph.D. from Moscow State University. Before coming to the Zimmerli she worked at the State Tretyakov Gallery in Moscow, and since 2001 has served as executive director of the Malevich Society in New York, becoming its board member in 2015. She has published broadly on Russian avant-garde and contemporary art, both in Russian and in English. She is co-editor of a special Russian-American issue of the Pinakotheke journal (Vol. 21-22, no 1-2, 2006), editor of Claude and Nina Gruen Collection of Contemporary Russian Art (Zimmerli Art Museum, 2008), a contributor to Moscow Conceptualism in Context (Prestel, 2011) and Sokov (Kerber, 2012), and editor of Oleg Vassiliev: Space and Light (Zimmerli Art Museum, 2014). Her book Avant-Garde of the 1920s: Textile Designs, was published by Tatlin Press in 2016.