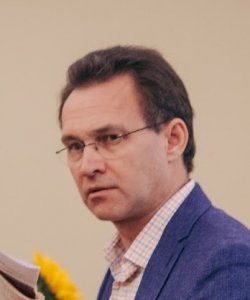 Ilya Doronchenkov – Chair and Professor in the Department of Art History of the European University at St. Petersburg. He teaches the history of 19th-century western art at the Repin Institute of Painting, Sculpture and Architecture (Academy of Fine Arts). He has been a Visiting Professor at Brown University (Providence, RI), Albert-Ludwigs University (Freiburg, Germany), Venice International University (Italy). Doronchenkov’s research has been supported by the Fulbright Program, the Getty Grant Program, the British Council, and the Clark Art Institute. He edited a critical anthology Russian and Soviet Views of Modern Western Art, 1890s – Mid 1930s published by University of California Press in the series Documents of the Twentieth Century Art (2009).  His major arears of study are the reception of western Modernist art in Russia in the 1890 to1930s, the history of art history, and Russian literature and the visual arts.