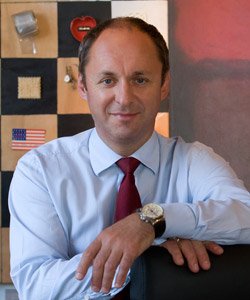 Igor Tsukanov graduated from Moscow University in 1984 with a degree in Mathematical Economics, before going on to attain a Ph.D. in International Economics and Finance from the Institute of World Economy of the Russian Academy of Sciences. In 1992, he set up the CentreInvest Group, a financial services company headquartered in Moscow with offices in New York, London and Kiev, which he ran as the CEO and President for 15 years.

Tsukanov is Chairman of the Tsukanov Family Foundation (TFF), a UK-based charity supporting education, culture, and the arts in Russia and around the world.  For years the TFF has worked with leading Russian museums.  Tsukanov was involved in drafting the first sponsorship program for the Tretyakov Gallery (Moscow) that has been running successfully for the last 20 years.  For the Tretyakov Gallery, the TFF has also financed acquisitions of artworks by major Russian contemporary artists.  In 2011, in partnership with the Moscow Museum of Modern Art (MMOMA) the TFF arranged the retrospective exhibition of Leonid Sokov, a founding member of Sots Art movement.  In 2015 the TFF and MMOMA held the exhibition of works by two legendary abstract Russian artists, Vladimir Nemukhin and Lidya Masterkova.

In partnership with the Saatchi Gallery (London) in 2013 the TFF orchestrated an important exhibition of the Russian post-war artists “Breaking the Ice: Moscow Art, 1960-1980s” that attracted almost 700, 000 visitors and was ranked in the top five of the most popular art shows in London, Paris and New York.  The 2015 TFF-Saatchi Gallery project “Post-Pop: East Meets West” brought together 250 artworks of the 100 artists from the US, UK, China and Russia. For 2017 the TFF and Saatchi Gallery have announced a new exhibition “Art as Resistance: Post-Soviet Actionism, 1990-2010s.” The TFF also sponsored numerous international art shows, including "Russia and the Arts: The Age of Tolstoy and Tchaikovsky" (2016) in the National Portrait Gallery (London).

In the art education the TFF supports art Yale School of Art (US), the Goldsmiths Art School (UK) and the Institute of Contemporary Art (Russia).  At the Yale School of Art, the TFF has financed the Oleg Vassiliev scholarship that brings Russian artists and curators to Yale for various seminars and workshops.  For the Goldsmiths Art School the TFF has structured and financed a student exchange program with the Institute of Contemporary Art (Moscow) that has been running since 2010.

The TFF owns one of the world’s largest collections of post-war Russian art, which can be found at www.TsukanovArtCollection.com.  The collection has been built up since 2000 with the major focus on the period 1960-1990. In 2016 the TFF donated 10 artworks from its collection to the Pompidou Art Center (Paris).

In addition, Igor Tsukanov is a member of the Development Committee of Eton College (UK), the Board of Trustees of the Moscow Multimedia Art Museum, the Honorary Board of Directors of the Royal Opera House.  He also previously served as a member of the Russian and Eastern Europe Art Committee of the Tate Modern Museum and the Board of Directors of the Hermitage Foundation (USA).