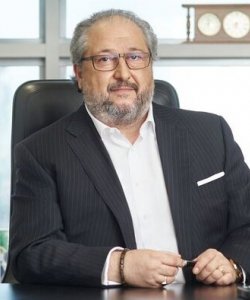 Boris Mints is the founder of the Mints Family Charitable Foundation. Over a period of several years Mr. Mints has been supporting a number of cultural and charitable projects, including Golden Mask Theater Festival.  He is a member of the Guardian Board of Vladimir Spivakov Charitable Foundation, among others.  Boris Iosifovich founded Russia's first Museum of Russian Impressionism on the basis of his personal art collection, which opened its doors to the public in May 2016.  The museum occupies the site of the former Bolshevik confectionery factory.   During the first year of its existence, the museum organized several landmark exhibitions that revealed unknown or forgotten artists to the Moscow public. The Museum offers exhibition and educational activities, hosts lectures and master classes for adults and children. In 2017, the Museum of Russian Impressionism gifted one of the best works from its collection, Valery Koshlyakov's Ministry of Foreign Affairs, to Georges Pompidou Center in Paris. The painting was donated a part of a collection drive for the Center, which united the world's major modern art collectors.  It was displayed in the exhibition "Collection!"