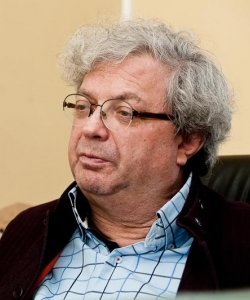 Alexander Borovsky is the head of the Department of Newest Trends in the State Russian Museum, St. Petersburg.  He has organized dozens of exhibitions connected with the project “Ludwig Museum in the Russian Museum.”  He has been and art critic and columnist for several journals. He serves on the juries of the art prizes Innovation; The Kandinsky Prize; The Kuroykhin Prize; Ars Fennica, and others. Borovsky has authored over 300 texts on art of the 19th and 21st centuries, including Silhouettes of Contemporary Artists (2003); Sheila Isham. A Master of Return (2005); Close Reading (2009); Long Exposure: Texts on Contemporary Photography (2010); Slate Pencil from the North: Texts on the Graphic Arts, 1978-2012 (2012); Some Relations of Art to Reality (2017); One Day Zeuxis and Parrhasios … (2017).  In recent years, he has been writing fairy tales for children.